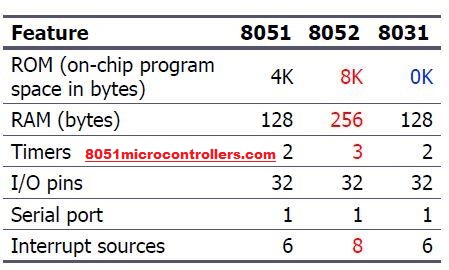 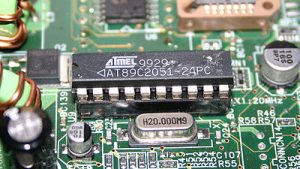 Intel Corporation developed first microprocessor 4004. After this invention Intel developed also 8085, 8086 microprocessor and create revolution in computer history. Later in 1981 Inter Corporation developed another amazing chip. It was 8-bit microcontroller based on 8051 core called 8051 microcontroller. It became famous for its versatile functions of and identified as System On Chip with 4K byte on chip Read

Only Memory ROM, 128 bytes of Random Access Memory RAM. One COM port for serial communications with two timers, 4 PORTS with 8 bit data, all these were available in a single chip. It revolutionized the world and become the most popul

ar chip in the world. Intel Corporation permitted other manufacturers to make the chip and sell in the market with the 8051 Core CPU. Its compatibility makes it widely accepted microcontr

oller. If you developed an embedded system for 8051 core, so it is compatible with other manufacturer of 8051 MCU without knowing its manufacturers. It opens new doors of advanced features and invented new variations and versions of 8051 Microcontrollers with on chip RAM and multiple level of speed.

This widely popular microcontroller 8051 has MCS-51 family developed by Intel Corporation. With the success of 8051 other companies also starts releases chips based on 8051 core with their own brand. Global brands like Atmel, Philips now NXP, Microchip, Zilog and Siemens worked on these chips and release most advanced microcontrollers based on the 8051 core developed by Intel. The most important and versatile feature of these devices is these chips can be programmed with the same MCS 8051 instruction sets, so that it becomes compatible with all other hardware. One program can be copied to any brand any chip with the same 8051 core.

Common and Basic Features of 8051 CPU based Microcontroller
8051 Microcontroller is equipped with lots of advanced features with following features:-

Few Variants of 8051
8052 microcontroller was another variable of 8051 based microcontrollers with the advanced memory storage and had extra 128 bytes of Random Access Memory RAM and having extra timer to control timing operations. Another feature of this chip was it had 8K bytes on chip program ROM not 4K bytes like other chips.

8031 Microcontroller was also a member of MCS-51 family chip, basically it was a chip having no ROM, we need to connect external memory chip to load program into the chip. Program can be as large as 64K bytes, and while connecting external ROM to 8031 it uses 2 ports from 4 existing ports.