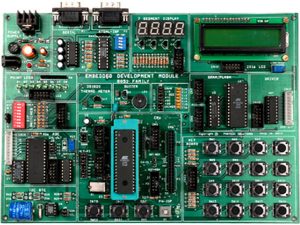 32kB and 64kB flash memory along with 1024 available data Random Access Memory RAM. X2 mode option is one of the best key feature of P89V51RD2 and P89V51RD2 NXP microcontrollers. Application can be run on conventional 80C51 12 clocks per machine cycle or may be X2 mode means six clocks per machine cycle. Its comes with the support of both ISP programming and parallel programming. Flash memory can be programmed using any one of the techniques. Parallel method of programming supports and offers gang programming, thus reduces the cost of programming and market cost.

Its a very low cost Philips now NXP P89V51RD2 development board having all basic and advanced components and peripherals requires to learn programming and can be used for production also. Thus can be used by beginners and advanced engineers. P89V52RD2 development board can be run on 7-14 voltages dc supply using adapter with reverse polarity protection circuit. A voltage regulator 7805 is used to supply 5 volts constant upto 2 Amp without getting heated. It equipped with switches to reset the power and a serial port RS232 for serial communication. A DB9 connector is given to communicate with the external world using MAX232 IC. Flash Magic software is used to program the IC of NXP’s serial port.