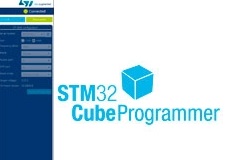 You can download free copy of of STM32 Cube Programmer called STM32CubeProg to program all types of microcontroller based on STM32 core. Its very easy to used and install. On of the most easiest way and user friendly environment for understanding how to read and write with verifying the loaded program into the memory using interface methods like JTAG or SWD., You can also use bootloading methods interfacing with USB DFU, SPI, CAN, UART.

For the sake of your knowledge, it is a GUI , Graphical User Interface tool which can easily download and operate, you can also runs its command from command line interface versions, programmers can run CLI commands for STM32 microcontrollers.