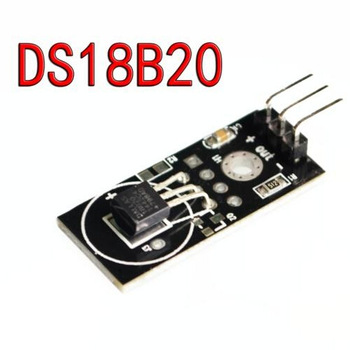 About DS18B20 Sensor
Temperature sensor manufactured by maxim, is widely used in temperature measuring applications. It is

used in hard conditions like mines, chemicals and soils. It is available in both formats water proof and rugged. As per the requirement we can use the sensor in our application. Measurement range is between -55 to +125 degree and +-5 degree. Every sensor has its own address and it requires only one pin of any microcontroller to communicate. Data is transferred by only one pin. So it saves pins of microcontroller.

1 wire communication method is used to communicate with DS18B20 sensor. It works with the data pin connected with pull up resistor with microcontroller and other two pins are used for power, one for positive and another for negative voltage. DS18B20 Microcontroller Circuit Diagram When the bus is not in use a single pull up resistor is used to keep the signal line in high order state. Internal storage of sensor is used to store the temperature which is 2-byte. To read the temperature 1 wire method is used to send the command and in return values are passed back to the microcontroller. A simple hardware circuit is used in the application.

Circuit Diagram DS18B20 is given below

The sensor unit is used to measure the temperature and can be used in various types of applications as per the need. Two types of sensors one is water proof and another is rugged a simple looking like transistor, its very inexpensive. Following is the list of applications where we can use this
Specifications and Features of DS18B20 : 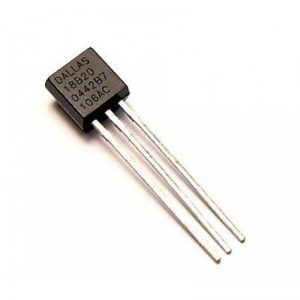 Equipped with alarm functions and non volatile upper and lower trigger points, DS18B20 sensor offers 9 bit to 12 bit temperature measurement in Celsius unit. Only 1 wire is used as a bus to carry command and data and connected with central processing unit. Each DS18B20 sensor has 64 bit serial code which offers large numbers of sensors to connect on single line, means we can connect many DS18B20 sensor in the same single one wire and the same data line is used to communicate with single microcontroller. It is simple to use multiple sensors with single data line. It has following features